The Curious Case of Elisa Lam

The following is not an urban legend. It is not a modern myth of nameless and faceless characters with vague details. What happened was quite real and tragic.  It is a mystery that has fascinated both paranormal and conventional researchers alike: The Curious Case of Elise Lam.

The Facts
Elise Lam, whose Cantonese name was Lam Ho Yi, was born on April 30th, 1991.  She was the daughter of Chinese immigrants David and Yinna Lam and a student at the University of British Columbia in Vancouver.  In January of 2013 she traveled to Los Angeles alone, visited regular tourist attractions and checked in the Cecil Hotel on January 28th.  She was reported missing on January 31st after failing to contact her family in Canada.  Three days before, she was moved from a shared,  hostel-style room into a single, private room due to exhibiting what her roommate had described as "odd behavior."

On February 19th, nearly five weeks after her disappearance, the body of Elise Lam was found floating in one of the Cecil Hotel's 1000 gallon water tanks.  The tanks were used to distribute water to the hotel and, after guests started complaining about discolored and foul smelling and tasting water, hotel personnel made the grim discovery. Her clothing and belongings were floating beside her.

A Haunting History
The Cecil Hotel had already had its share of macabre occurrences.  It has been nicknamed "The Suicide" in reference to the dozens of individuals who have taken their own lives there.  The reputation of the hotel is so widespread that it has since been renamed and rebranded as the "Stay on Main."

The Cecil has been the setting of an array of violent and tragic happenings.  The first recorded suicide on the premises was in 1931 when a man named W.K. Norton was found dead in his room, having ingested poison.  Since it's opening in 1927, over a dozen deaths have occurred at the Cecil Hotel including a woman who - not knowing she was pregnant - gave birth to a baby boy and proceeded to toss the newborn out of the hotel room window.

Murders and suicides were not the only dark things that have happened at the hotel.  Richard Ramirez, the serial killer known as "the Knight Stalker" is thought to have stayed at the Cecil Hotel while engaging in his killing spree in Los Angeles.  Another lesser known serial killer, Jack Unterweger - the Austrian man who was caught, imprisoned and then released in 1990 after having thought to be rehabilitated - stayed at the Cecil Hotel in 1991 where he strangled three prostitutes to death.  It is even said that Elizabeth Short, the subject of the still unsolved Black Dahlia murder, was drinking at the Cecil just days before she was killed.

The Elevator Video
The last record of Lam alive is as disturbing as it is perplexing. A surveillance video shows Lam in an elevator at the Cecil Hotel.  In the video footage, Elise can be seen stepping in and out of an elevator, apparently speaking to someone and, in some instances, appears to be hiding.  She waves her arms, moves to and fro and side to side. She seems frantic, confused and afraid.  Even more strange, the elevator itself seems to be mysteriously malfunctioning as she pushes the buttons several times to no avail.

The Video footage was released by the police prior to the discovery of Lam's body after having no leads in her disappearance.  It has since been the subject of much paranormal speculation and a host of conspiracy theories.  Some even suggest the footage was doctored or created to cause misdirection in the case. 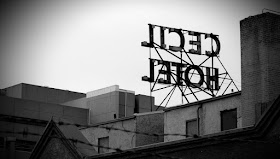 The Unexplained
Much is still left unresolved regarding the death of Elise Lam.  It is still not known how she got to the roof of the hotel or entered the water tank.  The hotel staff would use large ladders to examine the inside of the tanks and it would have been near impossible for an individual to climb into the tank alone.  The lid of the tank would have been difficult for her to open , not to mention the fact that she would have had to pass through a locked and alarmed door to the roof.  She was naked when she was found, yet no other evidence of foul play was discovered.  The autopsy report suggested that her death was accidental, but it was later changed to say her cause of death was undetermined.

There is also the issue of what exactly is occurring in the elevator footage.  It seems probable that she could be hiding from an individual whom she suspects will do her harm.  However, her odd behavior seems to counter this idea along with the fact that she never telephoned the police for help.  Was she interacting with someone outside of the view of the camera?  Was she having a psychotic episode?

Another odd feature of this case is the eerie similarities to the 2005 horror movie Dark Water, a remake of a 2002 Japanese film.  The movie tells the story of a young girl, Natasha, who drowns in the water tank of an apartment building.  Her body is not immediately found and her death remains a mystery.  Her spirit then haunts new tenants of the apartment who eventually discover the young girls body.  The coincidences only become more disturbing.  The mother and daughter who move into the apartment after Natasha's death are named Dahlia and Cecilia.  Is this perhaps a prophetic reference to the Cecil Hotel and the murders which made it famous?  There is a scene in the movie of the child gaining access to a roof top door which was supposed to be locked and scenes of the ghosts of the dead specifically manifesting in the elevator of the apartment.  Both Natasha and Cecilia are in red, hooded coats, similar to the one Elise Lam can be seen wearing in the elevator footage.

Theories
Many alternative theories have been formed regarding the death of Elise Lam.  Some are plausible, such as the idea that Lam was pursued by an individual intent on harming her to whom she inevitably fell victim.  Some are much more extraordinary, such as the idea that Lam was haunted by a vengeful spirit of one the hotel's many victims, much like in the movie Dark Water.  Perhaps it was this wraith that Lam hid from in the elevator.

One theory involves a tuberculosis outbreak which was occurring near the Cecil Hotel at the time of Elise Lam's disappearance.  It is the name of the specific test for tuberculosis that raises questions: the LAM-ELISA Tuberculosis test kit.  According to this theory, Elise Lam was the victim of a controlled TB outbreak.  Supposedly, she was infected with the disease, killed and her body was deposited into the Cecil Hotel water tank as a means of distributing the disease to others.  But why would anyone want to spread TB?  The LAM-ELISA test was found to only be capable of detecting a little over 50% of tuberculosis cases and was only useful in detecting a specific form of TB.  It is thought that Elise was used to infect others with a form of TB that could be detected by the LAM-ELISA test in order to increase sales of the test, vaccines and medicines that could then be administered to prevent or cure it.  The LAM-ELISA test seems to have been developed prior to 2009.  Was this a long-con plot by the Illuminati?

Another, more otherworldly theory is that Elise Lam was playing the The Elevator Game. This "game," which seems to have originated in Korea, involves the systematic pressing of elevator buttons in a building of at least ten stories.  If the buttons are pressed in correct sequence, and all of the directions are followed, one finds themselves getting off at the tenth floor of the building and stepping foot into another dimension.  One aspect of the elevator game is a woman, presumably from the otherworld, who will board the elevator as well and has the potential to harm or even kill.  Was it this otherworldly woman that Elise was hiding from, frantically pressing elevator buttons in an attempt to reenter her own universe?

Conclusion
Elise Lam's odd behavior may have been caused by drugs prescribed to her for anxiety and depression.  Lam was diagnosed with bi-polar disorder and had been prescribed Wellbutrin, Lamotrigine, Quetiapine and Effexor.  The contents of her social media accounts, while once cheerful, began to reflect her ever growing emotional struggle.

She could have been under the influence of hallucinogenic drugs or a sleeping aid, which could account for her bizarre behavior in the elevator.  Yet, no trace of drugs were found during her post mortem.

While researchers may never know what happened to Elise Lam that day, the case continues to inspire tellers of macabre stories and obsess paranormal investigators and internet would-be detectives.  One can only hope that those individuals remember that this was not a story of fantasy, but one that happened to a real young woman whose tragedy still looms in the heavy hearts of her friends and family.